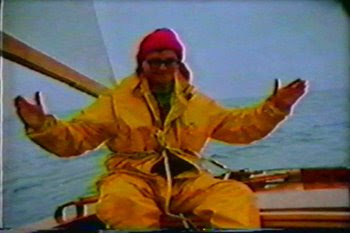 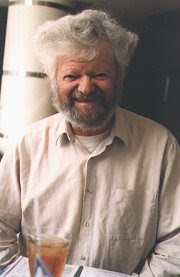 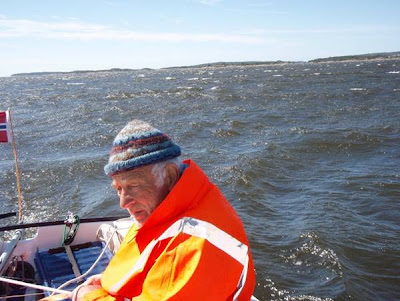 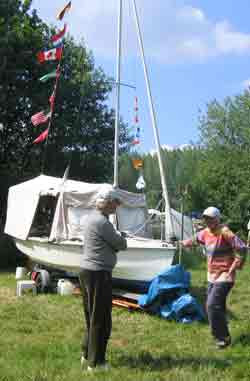 'This is Frank and Margaret Dye with their tent equipped Wayfarer at Beale Park. Frank was about the first person to have the idea of using a Wayfarer dinghy for long distance cruising and over the years has made amazing trips to Norway and Iceland and also in Canada. Margaret is also a keen sailor and has made done some pretty adventurous sailing on her own account.' 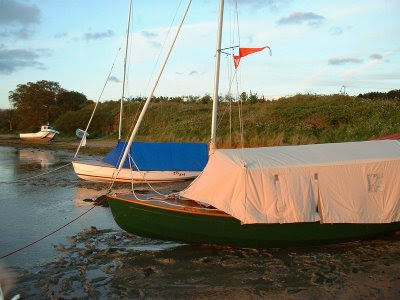 Wayfarers with Dye style tents, Suffolk, UK
unattributed
Frank Dye passed away, peacefully it is said, May 16, 2010, at the age of 82. He had a rich and rewarding life, at least looking from here. He is survived by his wife, Margaret, who shared many of his adventures. The Dyes are legendary sailors. Their collective contribution to small boat cruising is immense. Frank and Margaret's contribution, though in many ways practical, is in my opinion mostly conceptual in that it redefined the possible. Frank's cruises to Iceland and Norway, documented in Ocean Crossing Wayfarer, written by Margaret working from Frank's logs, is a seminal piece of work which has inspired and opened the imaginations of small boat sailors worldwide. Another, ater book, Sailing at the Edge of Fear, recounts the couples adventure sailing from Florida to Maine, over several seasons, surviving a hurricane and eventually sailing into the Great Lakes. Margaret has also written an instructive and insightful guide/treatise on small open boat cruising titled Dingy Cruising, informative and exhaustive, very detailed, if a little dated.
All this was accomplished in the 15ft 10in Wayfarer dinghy, designed by Ian Proctor. Some eulogists have equated Frank's epic journeys to those of Shackleton and Bligh. In fact, the Dye's original wooden Wayfarer is housed in Britain's National Maritime Museum bracketed by exhibits on Dame Ellen McCarthur and Shackleton.

The first book I ever read on sailing adventure was the Dye's 'Ocean Crossing Wayfarer'. I found it provacative and astonishing. I think their legacy is that together and alone, they have reimagined the posssible for what one could accomplish in a small open sailboat and have provided guidance to anyone seeking to cruise, at any level, in such boats. Considered together, Frank and Margaret have produced a sort of small boat sailing genius. On a hunch I wrote Webb Chiles to inquire whether he had been influenced by Frank's exploits when setting out to circumnavigate in his 19' open Drascombe Lugger Chidiock Tichborne. His reply:

"Of Frank Dye, although we never met, I was of course aware of him, and his voyage was one of those that did lead my thoughts toward my open boat voyage. Some others were TINKERBELL, and the voyage in a wooden Drascombe Lugger by two men, whose names escape me, from the U.K. to Australia, although I seem to recall they shipped it from the Med to somewhere in India because of problems in the Middle East. Such voyages made me consider how to expand the limits of what is possible. I think that Frank Dye made a great and original voyage."

Bravo, Frank, thanks, and ...congratulations on a life well lived!
Posted by Thomas Armstrong at 9:36 PM

Oh this is the saddest of news.

Despite his age, the re-release of two of his classic books, recounting his remarkable voyages to Iceland and Norway from the UK, have refreshed an already monolithic reputation as the greatest open small boat sailor of all time (if you discount St Brendan, an even then...). he was a nice man, too, by all accounts.

So many of these truly extraordinary characters are leaving us: e.g. Mike Richey, not long ago..

Frank's voyages inspired me when I read them 30 years ago, enough to buy a wooden wayfarer No 176, identical to the Dye's one in the Nat Maritime Museum - even the same duck egg blue colour - wonder where she is now!