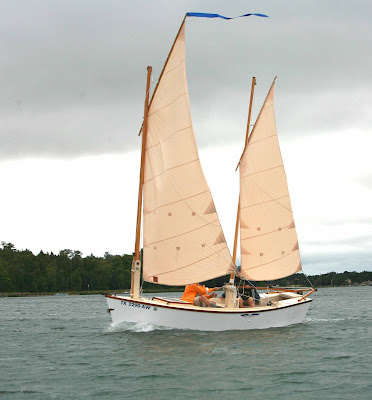 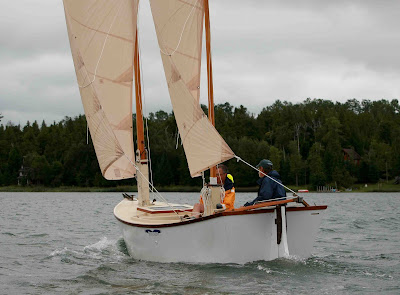 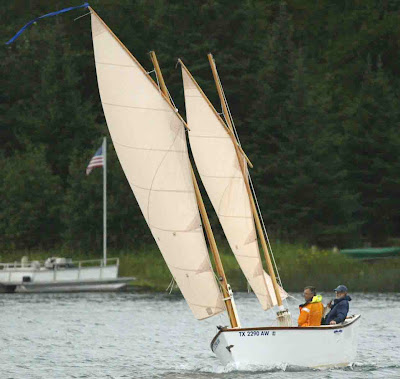 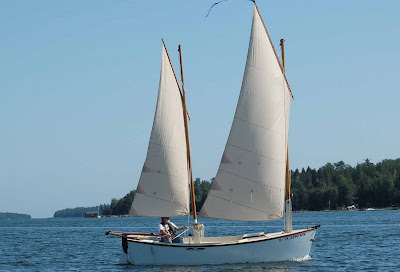 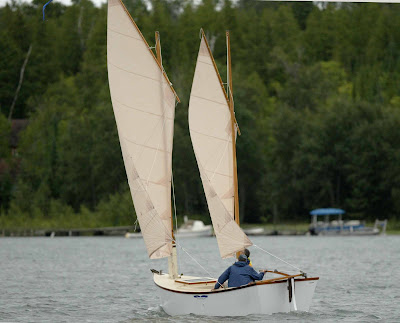 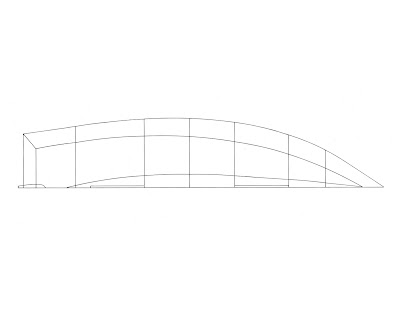 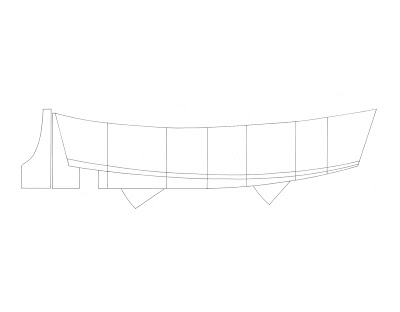 Plan and profile views of the Sea Eagle 16.5 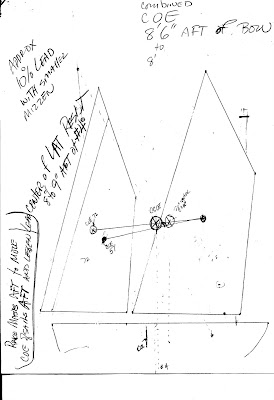 The original sketches for the lug rigged cat yawl. 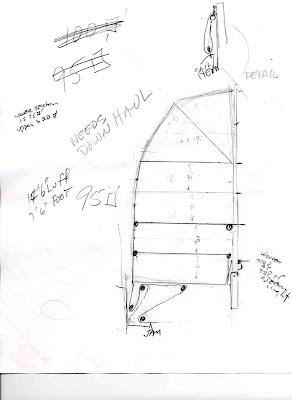 After sailing Pandion for a summer, David is considering revising the sail plan with a batwing main for easier reefing. 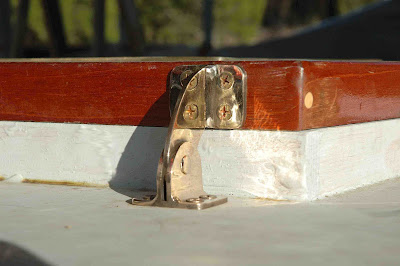 Detail of the hatch hinge, David and crew designed and fabricated all of the bronze hardware. 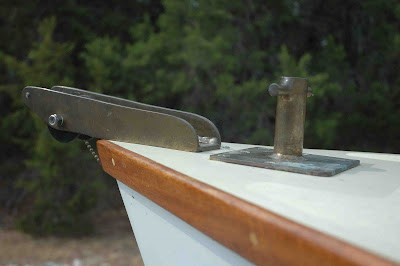 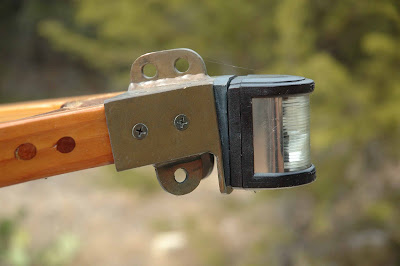 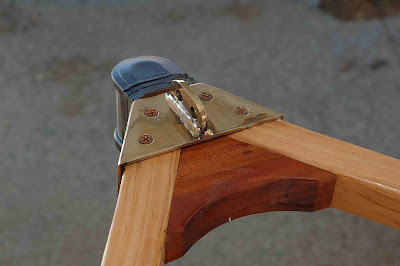 Another view of the stern light showing exquisite attention to detail.


The March/April issue of The Small Craft Advisor featured a boat in their Plan Study column which really caught my eye. David Nichols is a long standing Texas boatbuilder/designer who also summers in Michigan where he teaches at the Great Lakes Boat Building School. He is best known for his small canoes and fishing boats, but is branching out. His latest creation is intended to be a family of small yachts ranging from 14'5 to 27'. His design precis states that he was looking for a beach cruiser that could easily be launched from a trailer while capable of standing up to some fairly big water, The Sea of Cortez, for example, and having shallow enough draft to allow use in his local skinny Texas water. The built prototype is the Sea Eagle 16.5 Pandion. David trailed her to Michigan for sea trials last summer. He wrote a full design brief including the results of his trials in the Les Cheneaux Isles on Lake Huron for the SCA article. Originally designed as a lug rigged cat ketch, David wrote me that based on his experiences sailing her last summer he is rethinking the sail plan and working on an alternate rig, reference the drawing above of a batwing main. Here is an excerpt from David's new book, soon to be published by Breakaway Books on the 16.5 and 14.5 Sea Eagles. Plans for both boats included.

"I spent last summer sailing the boat with standing lug sails and I love lug sails. The sails are fast and easy to rig. They are reasonably weatherly and easy to handle. I particularly like the ability to brail up the sails but I felt I wanted to make some changes.

The balance of the boat was good. There was a small amount of weather helm but the helm was light and pleasant. That meant I needed the combined center of effort of news sails to match the CCOE of the old sail plan when and if I changed the sail plan.

So why did I decide to change the main sail and why did settle on a batwing? Let me go through all the sails I considered and then I think those two questions will be answered.

First, boomless lug sails are somewhat difficult to reef. It’s an involved process not easily done in open water and single handed. Also, I found storing the sails when struck but still under way a problem. It was always a wrestling match and in open water and high winds not something I wanted to do.

The oblivious change would be to add a boom to both lug sails and if I hadn’t intended to make my own sail this would have been the easiest and most cost effective solution. And a good one I might add. Actually, that’s what I did on the mizzen sail.

The first sail I considered was a boomless gaff with a foot of 8 feet. This gave about the right sheeting angle and I do like a boomless sail. The gaff sail could be scandalized (with the right gaff jaws) and I could get plenty a sail area. The main problem with this and all boomless sails for that matter is the sheeting angle off the wind. I could have compensated some with a vang off the mizzen mast and a Cunningham but that still left the reefing and storage issues.

The next choice was a boomed, loose-footed gaff sail. Scandalizing was still an option and the loose foot would allow the sail to be thriced up as well. The only problem was being limited to a 7 foot 9 inch boom (The distance between the main and mizzen mast is 8 feet) and I couldn’t get quite enough sail area.

But if I filled in the area between the gaff and the mast I came up just a few square feet short of the 101 square feet of the old main lug sail. I found that by adding just two battens I could get the batwing shape I wanted. The Batwing eliminated the ability to scandalize but I could still run the vang from the mizzen mast to the lower batten for control of off the wind twist.

All of this does come with a price. The original rig had a halyard and brailing line for both sails (total of 4 lines), two sheets for the main and one for the mizzen (total 3 lines) and a rigging time of less than 30 minutes solo.

Is the new rig worth the extra price? For me, yes. For someone else, perhaps not. But that’s the joy of building your own boat. You get to tailor it to exactly what works for you. You’re not stuck with a one size fits all boat.

Is this sail plan set in concrete? I doubt it seriously. I will, I suspect, add the batwing to the mizzen and I may try the boat as a cat schooner. I had intended to change to a schooner but the CCOE moved too much so I abandoned that rig, for a while anyway. So many sails so little time.

I think there is a ‘completeness’ or immense satisfaction that comes with moving through the water in a boat that you built and made the sails for. Your hand connects with both the water and the wind in a very personal way. It’s a very Zen experience."

The book also has an exposition of why David chose tandem centerboards, visible in the profile drawing above.
David and his team fabricated all the bronze hardware for the boat( see the detail photos above ), and he suggests that anyone with brazing and welding kills can do the same, but adds that given the price of bronze, maybe stainless is better. I believe there are also larger boats in the works, David mentioned a 27' and a 22' version. Stay tuned.

Posted by Thomas Armstrong at 10:27 PM

i have gone through this blog. nowadays im working from my home as a online businessman. and the above blog is really helpful.