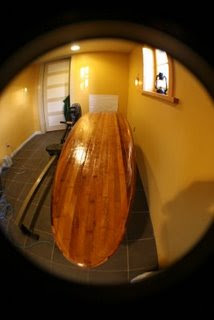 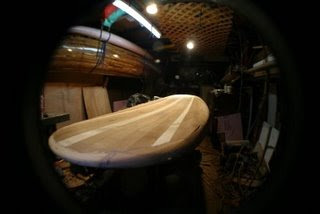 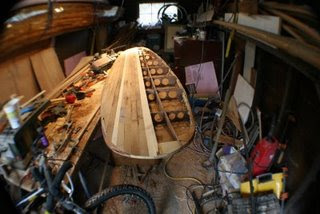 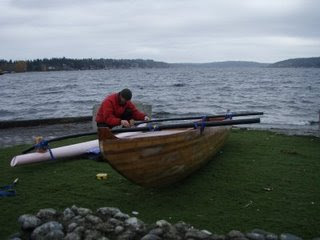 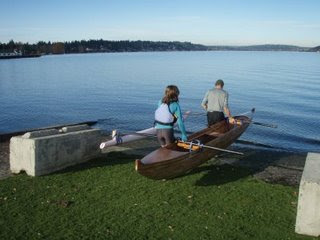 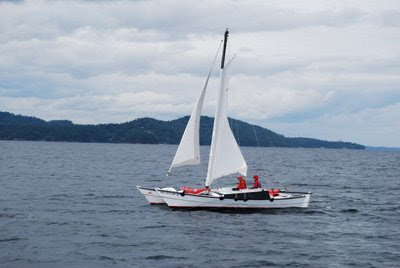 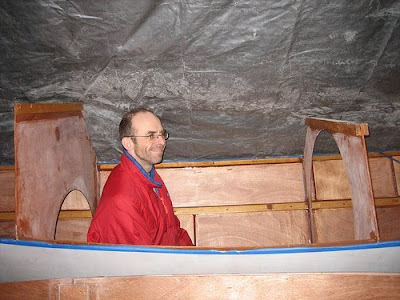 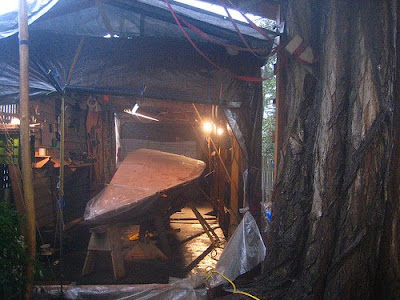 Thomas Nielsen is active. In the last year he's finished his Wharram Tiki 26 Tsunamichaser, he's built an Ulua for himself and his wife to paddle, and one  for his daughter, both from a Gary Dierking design, is currently finishing a hollow strip built bamboo surfboard and is planning a traditional skin on frame kayak for his daughter. Whew, I am tired just writing it all. Keep in mind he's doing this in a small (1o'x20' or so) garage. Thomas also has ambitions beyond mere boatbuilding. There are many homebuilders of Wharram catamarans. James Wharram is a very popular designer, and rightly so. What makes Thomas stand out is that his boat has been specifically built to achieve a purpose, a scientific endeavour. to wit:

In 1985 Tom spent the summer in the Canadian Arctic doing geological research and village resupply aboard the CCGC Nahdik. Since then Tom has been following the ice maps and can attest to a significant decrease in polar ice every year. His intention is to retrace his original journey, photographing along the way to document the changes. He has lots of material from the '85 trip to verify the evidence and contrast with current conditions. This is a serious scientific undertaking and is being supported by ROBOsky.com . Seriousness aside Thomas plans to take his family along as crew. Wouldn't you like to have such a dad? The voyage will begin at Great Slave Lake, one of the five deepest lakes on our planet at 614m. and is the fifth largest lake in North America, tenth largest in the world. Tom plans to trailer the boat to the Hay River and take this up into Great Slave. Across the lake to Yellowknife, where he may leave the boat to overwinter. He hopes to start this coming July and spend about two months this year exploring Great Slave. Then he'll resume giong  from Yellowknife to the Mackenzie and out into the Beaufort Sea, then over to the Bering, through the Straits and then the Aleutians, down through the Inside Passage and home to Seattle. Ambitious. He plans to bring along Spot technology which can, among other things, track his progress at 20 minute intervals. We've talked about the possibility that we may be able to track his progress here on 70.8% and on his Tsunamichaser weblog. Should be a great deal of fun!
Postscript: Thomas gave me a correction, he also! built an Ulua for his wife and himself to paddle. I stand corrected, and also, a little in awe.
Posted by Thomas Armstrong at 10:14 PM