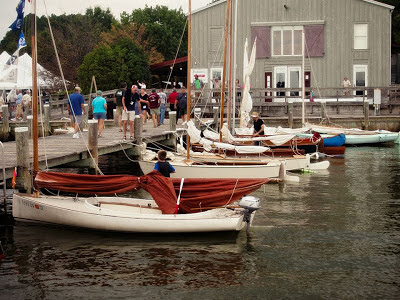 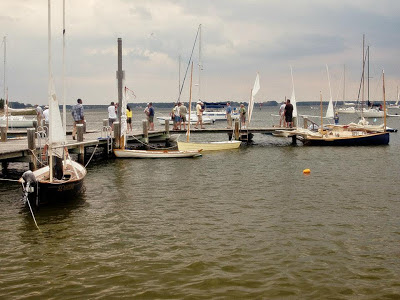 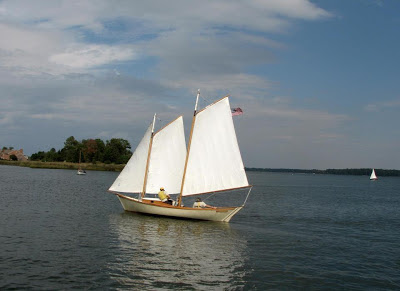 Coming in from the race is James Miller in Fretless, a 26' Tancook Whaler built by Peter Van Dine in Qwings, MD, 1979. 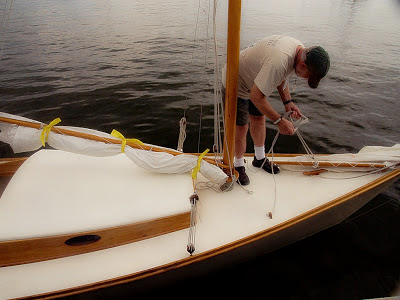 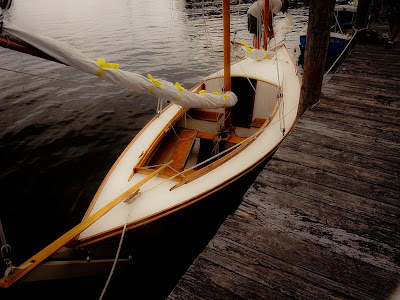 Pete at the dock taking care of the details 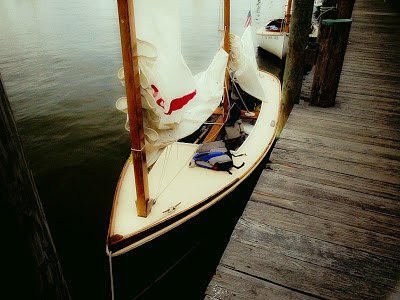 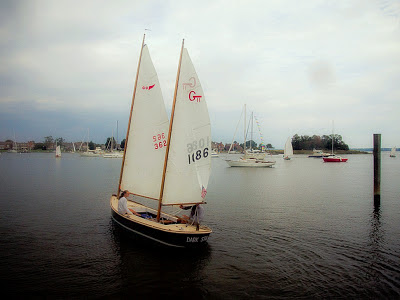 I just caught the owner as he was pulling out, said she was a 'Gardner' sharpie, no more info. 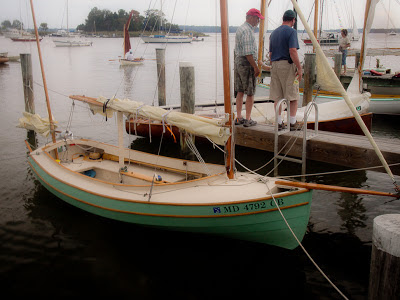 While the above two boats were new to me, this Welsford Navigator, Slip Jig, is a perennial visitor,owner built by Kevin Brennan 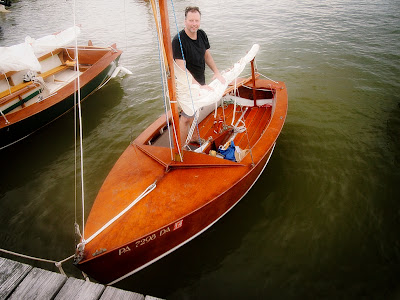 Just in from the race is another regular face at the MASCF, Andy Slavincus  and his Olin Stephans Blue Jay. 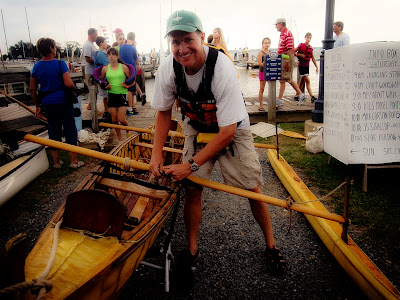 Tim Shaw added a sailing rig to his self designed and built outrigger canoe/proa Al Demany Chiman, and went to the races. Tim blogs about his boat activities @ Chineblog. 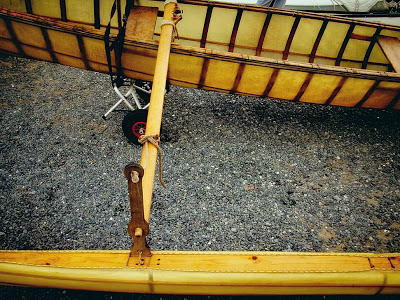 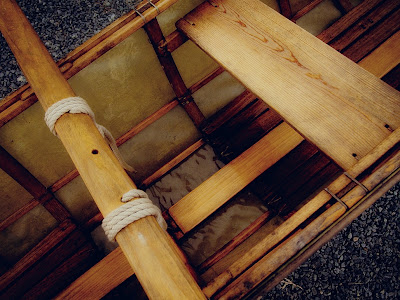 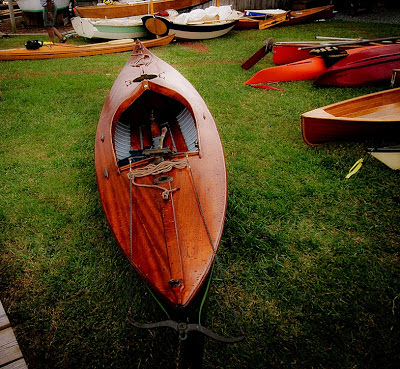 This marvel, and I am unsure of her name, was built by the Lavertue brothers, 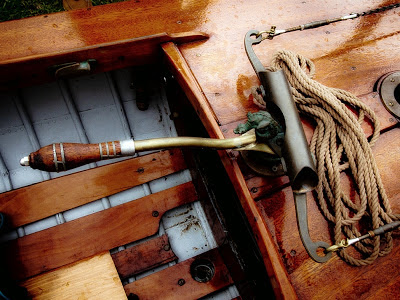 And fitted out with Bob Lavertue hardware. She took a spill in the race, but has recovered nicely. 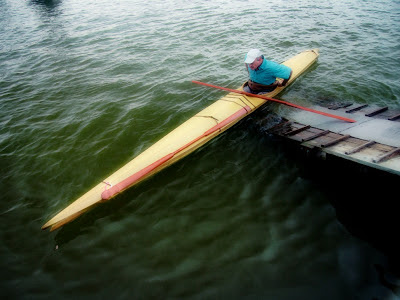 Man and Baidarka become one. 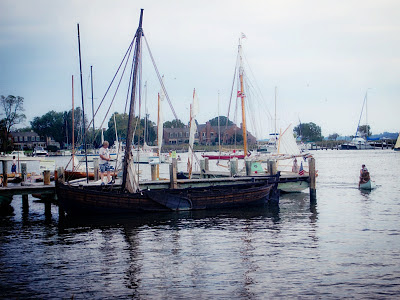 Sultana Projects built this replica of the John Smith shallop a few years back. 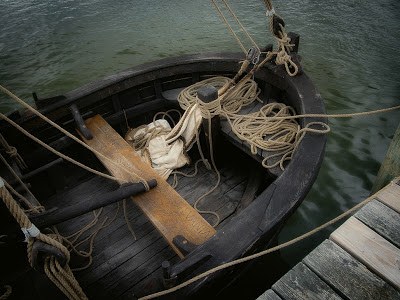 She now resides at the CBMM. 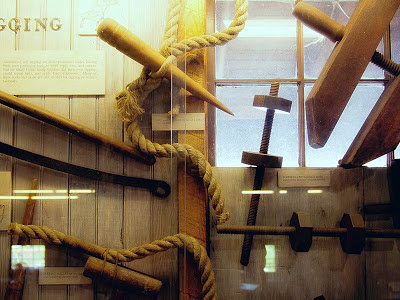 The museum grounds have some terrific displays, 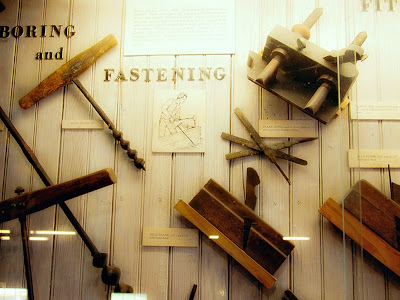 Bessie Lee is a seaside bateau,, from the Eastern Shore of VA. These boats worked both the bay and ocean sides of the penninsula. She has three mast steps, visible on the foredeck, to accommodate various conditions. Built c. 1820 by Hanson Downes, Capeville VA. 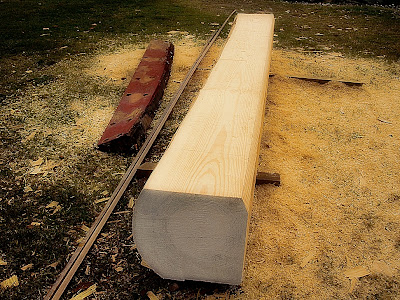 A big chunk of something destined to become part of a restoration, though I'm not sure which boat. 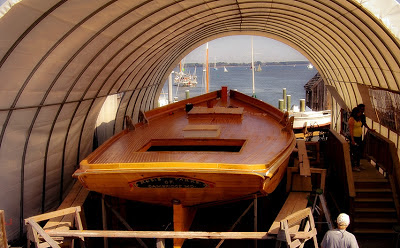 Rosie Parks in her restoration shed.
The skipjack Rosie Parks was built in 1955 in Dorchester County by legendary boatbuilder Bronza Parks, for his brother, Captain Orville Parks, Sr. The sailing oyster dredging workboat was named after their mother. The skipjack is now under historic restoration at the Chesapeake Bay Maritime Museum. 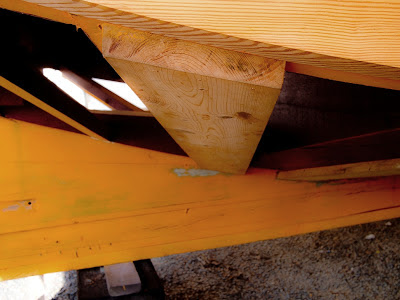 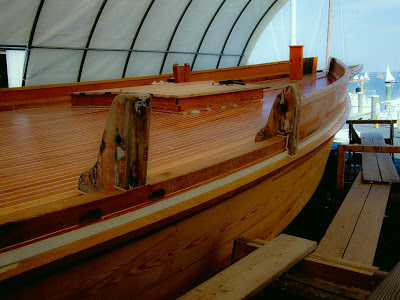 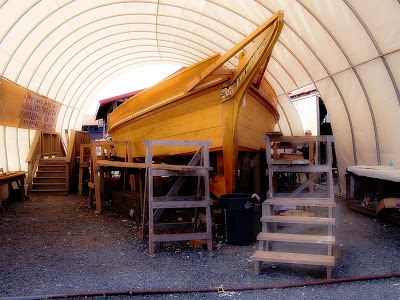 All photos copyright Thomas Armstrong except where noted
Another grand day in St. Michaels, MD. This festival never fails to please the small boat enthusiast. While it's not as broad in scope as Mystic, it's every bit as engaging and satisfying. That's a tall order. A little rain towards the end of the day dampened no ones spirits. It's a great museum doing really good work, and hosts a multitude of interesting weekends. Check it out if you aren't familiar with them. My day at the festival was followed by crabcakes, shrimp and drinks with my companions in charming St. Michaels.. Doesn't get any better.

Sincere thanks to John Ford and Tracey Munson for easing my way, and to all the participants in #30!

Originally posted by Thomas Armstrong on 70.8%

Posted by Thomas Armstrong at 10:35 PM

Second best thing to being there! Thanks, Thomas.

Nice comment, thanks. Maybe next year you'll get down?

It's now on my list. Man, my old man would've loved it. Good enough reason to attend.

This web site is really a walk-through for all of the info you wanted about this and didn’t know who to ask. Yacht charter dubai