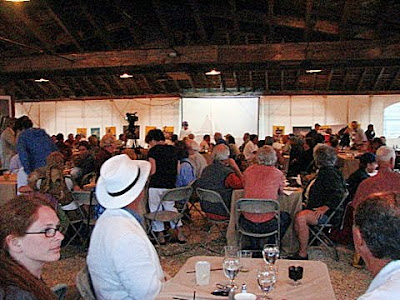 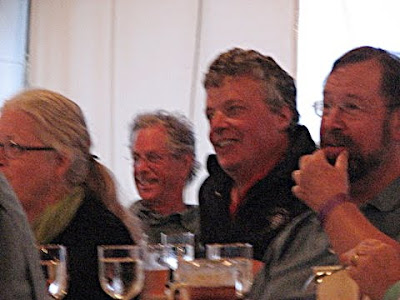 In the center, Jon Wilson and Matt Murphy. Jon is the founder of WoodenBoat Magazine and Matt is Editor. 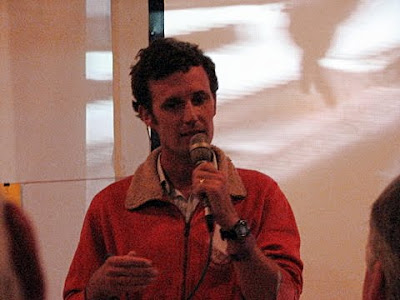 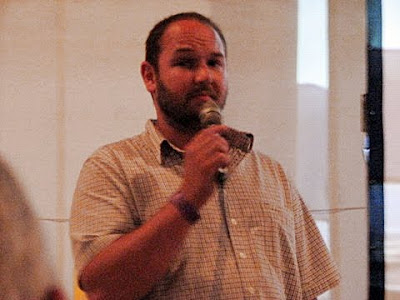 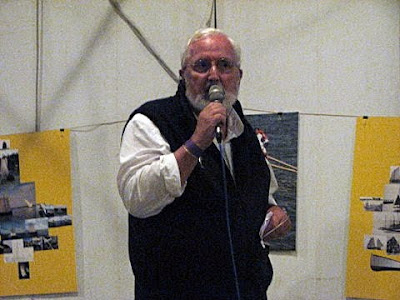 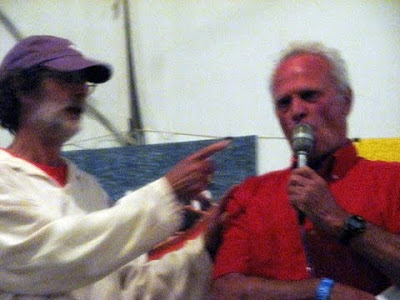 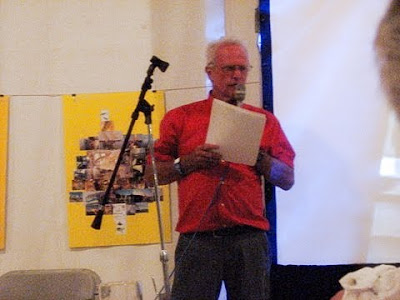 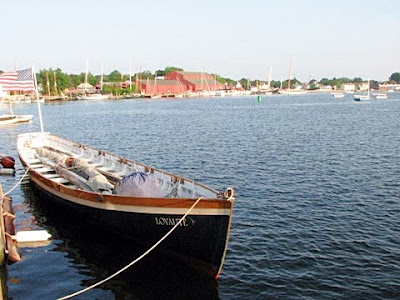 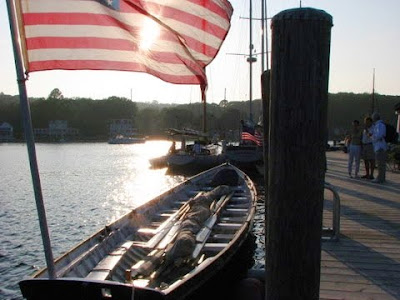 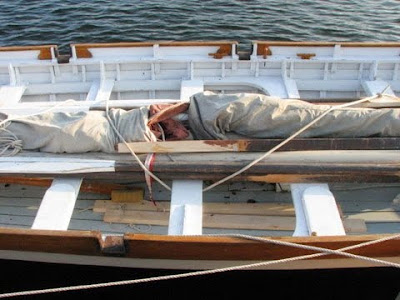 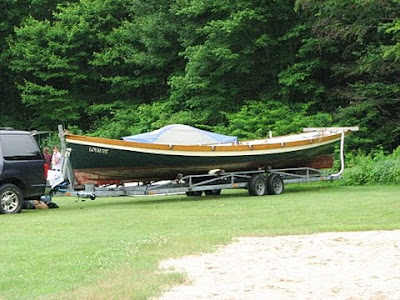 Loyaute showed up in my campground the next morning. 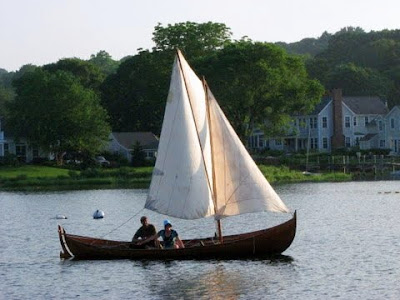 Norwegian type, built at the Apprenticeshop about 25 years ago, quite the beauty. 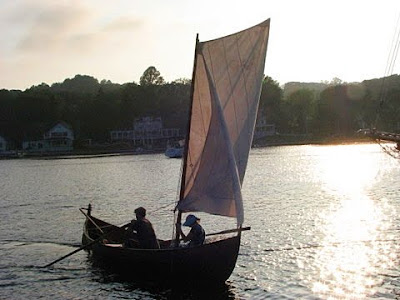 Daniel Bennett and Miriam Feinstein bring her in. 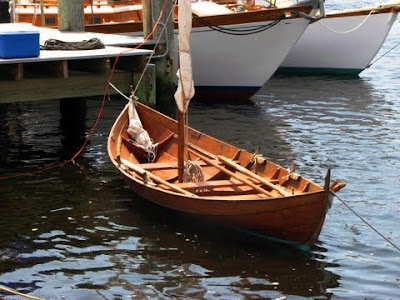 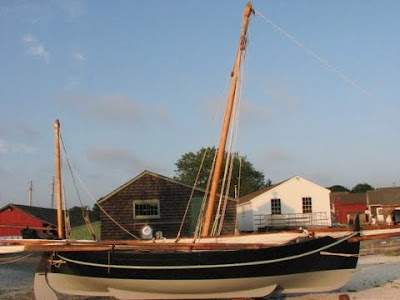 Trem, a scaled down Tremolino 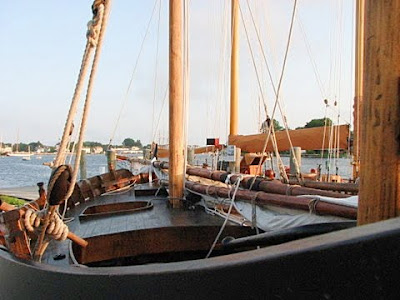 Tremolino was Joseph Conrad's choice for smuggling arms into Catalonia. 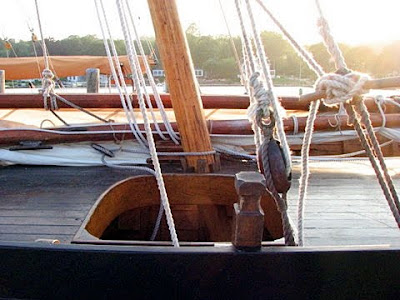 Conrad wrote a book about this enterprise, titled Tremolino. 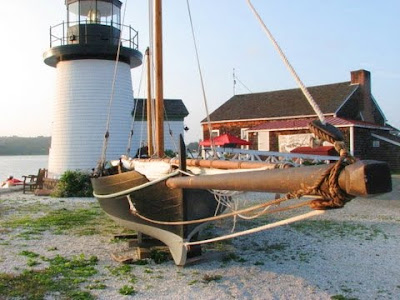 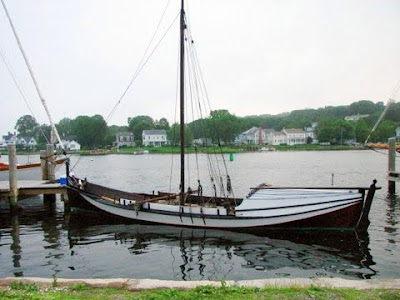 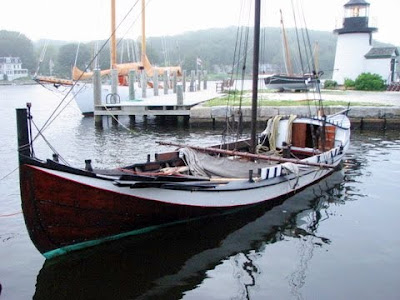 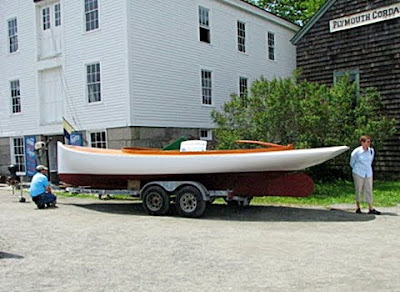 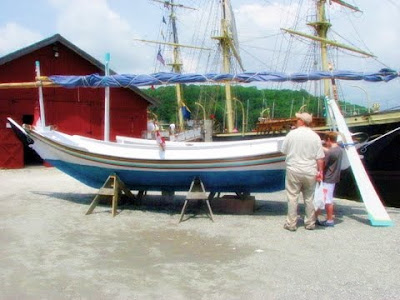 Lancing Madura is a traditional Indonesian fishing vessel, a Gole'an.

I would be remiss not to mention John Eastman (ex apprentice who helps Lance in various ways)
and his great crew of folks who ferried down the various 'Icon Boats' from Maine to Mystic. These folks graciously gave of their time and cash to get the boats down, had to pay their way in, were denied their promised dinner until later in the evening and really only were given scant recognition for their efforts, no doubt this was all due to miscommunication. I was privileged to get to know this crew as we waited for proceedings to begin, and indeed they are fine lot. Thanks to you all!

First of all, let me apologize for the poor quality of the photos inside the tent at the tribute dinner. I am a flash snob. I dislike the way flash flattens and distorts, and I did not have my tripod, so the images are rather grainy. It shouldn't matter though, as the experience of Lance's tribute is more about substance than aesthetics.
Lance Lee is a legendary figure in the wooden boat revival and the implementation of boat building as a tool to involve youth in experiential education. He's the founder and original driving force of both the Apprenticeshop in ME, and the Atlantic Challenge with it's global appeal. There's also the Tremolino Project. Lance is what I would call a practical visionary, a man of great vision able to turn his visionary ideals into real, effective projects. His life and accomplishments are staggering, and there's a wealth of information on the web. His guiding lights have nominally been the work and life of Kurt Hahn and the works and philosophy of Joseph Conrad, to which I would add his experiences growing up in the Bahamas, on Man O' War Island. Surrounded by boatbuilding and living from the land and the sea, Lance learned a work ethic that has served him well to this day. His life story is intriguing, extraordinary and inspiring, but also well outside the scope of this blog post. It is a rich spider web of globally interconnected initiatives yielding far reaching results. I'll likely explore this man's life further in the future with multiple posts, but for now will limit myself to the proceedings last week at Mystic and some words about the Icon boats, it was quite a night.
First of all, the evening was steered by an exuberant and enthusiastic Carl Cramer, publisher of WoodenBoat. There were several introductions by various folk who'd been touched in one way or another by Lance's life and adventures, including a cousin. Most interesting for me was Bruce Haibisky, Apprenticeshop grad and co-author with Lance of "Twice Around the Loggerhead", an investigation of the whaling culture in the Azores and beautifully illustrated by Yvon LeCorre.
Bruce has been involved with Lance for the last 20 yrs. plus, over half his life. He's been involved with the Atlantic Challenge, the Tremolino Project among other things and says that the underlying philosophy of all Lances projects 'reveals whats good in us". Bruce is currently completing a circumnavigation in his 1950 John Atkin Vixen. Eric Stocking also attended the Apprenticeshop and is now the executive officer for them. He reported that the shop had launched six vessells in the week prior to the tribute and manages to get 150 kids on the water every summer. Lee Scarbrough pointed out that due to the success of the Atlantic Challenge there are at least 72 Bantry Bay gigs worldwide representing over 200,000 hours of building and learning, experiential education. Peter Neill, Director of Ocean Classroom spoke passionately about Lance and his initiatives. His key phrase for Lee is as an enabler. Citing a project in the Azores that built 12 Azorean Whaleboats, Peter said this project had enabled thousands of Azorean kids to grasp their heritage in a very real way and went on to declare that Lance's education model emphasized competence, work, ability and service. He labeled Lance Lee a 'unique enabler' shaping 'truly able hands'.

Then Lance. Sputtering, charismatic, a joy to behold, a tour de force. Early in his ramble Mr Lee made reference to how he's been told you can't 'put those two possums in the same sack', meaning the natural world and philosophy. For the rest of the evening he pointed to how he'd done just that. I don't have a transcript of his talk but will illustrate the gist of it by sharing several key phrases or epithets. First Lance noted the need to avoid 'the Tyranny of the Boat', which I interpret as meaning the 'Icon' boats as incubators for building not just boats but incorporating the experience into an 'apprenticeship to life'. From Kurt Hahn came the statement 'training through the sea'. Lance admonishes us to 'get out, go deep, come back and help', and to 'make it or repair it, don't buy it.' He says he's endeavoring to create 'young turks', which fits. Lance Lee sums it all up in a typically terse utterance, priorities are 'aquisition of experience and aquisition of knowledge.
IconBoats came about during a project in Leningrad, a reference to the spiritually significant small paintings. I'm assuming that's likewise for the boats, that these are boats having a spiritual resonance for Lee. It's not too difficult to see why. In order, above from top to bottom they are:

Loyaute, a Bantry Bay gig, the ttpe of boat used in the Atlantic Challenge

A small Scandinavian type built at the Apprenticeshop about 25 years ago. Daniel Bennett called her a Sonjiasbat, but I cannot confirm this. Most likely a type of Faering.

Trem, a scaled down Temolino

Varin, a Lestabåt: There's a great article on sailing this square sail replica in WB 95.

On Sunday, in the company of my friend Antonio Dias I had the chance to ask Lance about one of my 'Icon' boats, Eliboubane, owned and sailed by Yvon LeCorre, drawn by Francois Vivier. A French sardine boat. Lance's reply was 'meeting that boat changed my life, completely'. Hopefully we'll discover how and why soon.

Enjoy, sorry about the delay but I've had some personal issues which stood in the way of a more timely post.

A special thanks to Ben Fuller for pointing to certain errors and omissions. Thanks Ben.
Ben Fuller is currently the curator at the Penobscot Marine Museum after serving as the head curator for Mystic Seaport for 13 years.

Just recieved from Lin Pardy this text of a letter the Pardy's sent to Lance on the ocassion of his tribute. Carl Cramer read this out at the beginning of the tribute but I didn't have it, so wrote to Lin who sent it on to me. Thanks Lin and Larry.

The people who have been taught by Lance Lee may never build their own boat, nor voyage across oceans. But each of them have been empowered by realizing that everything that man has built started out first as a dream, then became a plan. The guiding force that turned the plan into a reality was the greatest tool of all – the human hand. That is why we say, when you teach a person how to use simple tools, you give them the gift of their hands. When you then take them out on the water in a boat they helped create, you give them the gift of dreams.

Our congratulations to Lance, he has opened many doors for young people. I bet they tell their children and their grandchildren about the skills they learned from Lance and about the first time they got a wood plane, chisel or hammer to do exactly what they wanted it to do.

Posted by Thomas Armstrong at 7:20 PM

There were two faerings built by the Apprenticeshop at Bath in the spring of 1979 at the show. They were built side by side under the tutelage of Paul Schweiss, a west coast (Tacoma, WA) builder trained in the Norwegian style. One was an Oselver and the other was the Sognaboat pictured under sail. 'Os' and 'Sogna' referred, I recall, to the fjords, rivers or regions the boats were indigenous to. Dave Foster and I built the Sognaboat and Mark Swanson (now of Lie-Nielson Toolworks) and Tim Lippert built the Oselver. Dave Foster was the master builder/instructor at the shop for decades and has sadly passed on this past December. He was such a pleasure to learn from and work alongside, as was Paul. Those weeks were the high water mark of my life learning about boatbuilding.