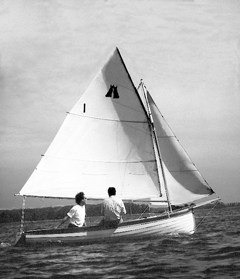 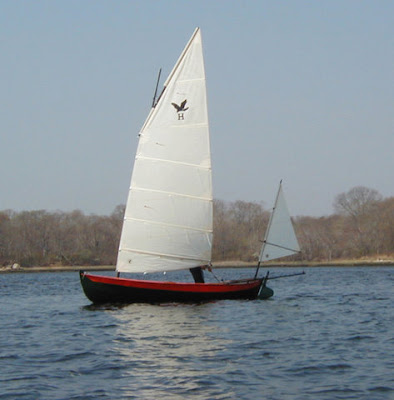 "If I had to chose, Harrier is my favorite boat. Small enough and still feels capable in fairly big water. The fastest I've ever been on a monohull, hydroplaning on her bottom plank like a ski at well over ten knots in a cold hard Northwester in Saint Michael's." 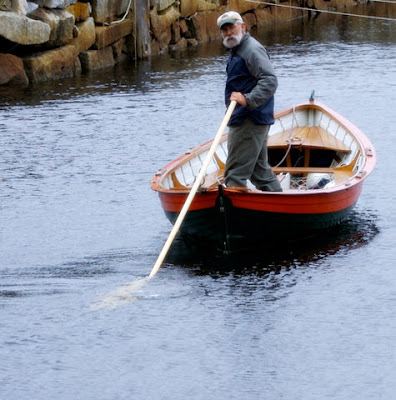 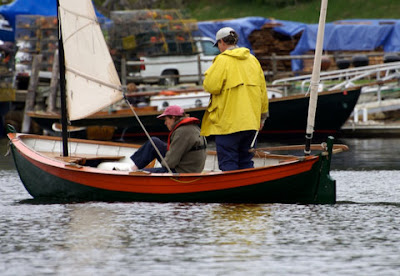 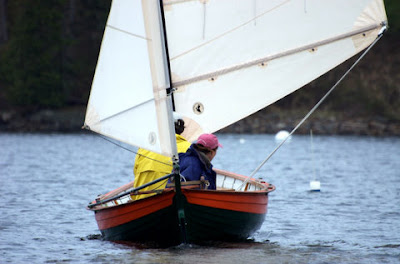 Trials with Jenny at the tiller 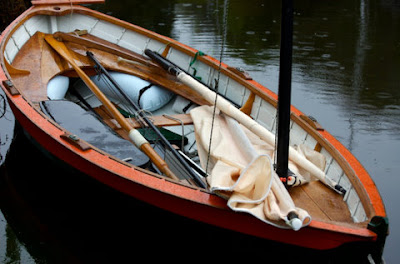 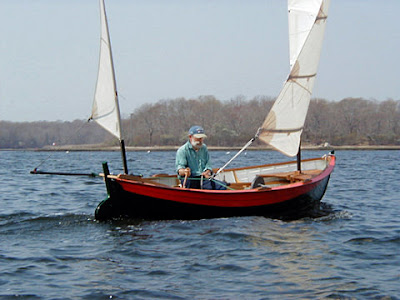 Owner and imaginer of Harrier, Ben Fuller on a reach.Ben is a small boat historian, former curator at Mystic and currently curator at the Penobscot Marine Museum. Ben authored a book on small boat plans available at Mystic Seaport Museum, it's on my wish list 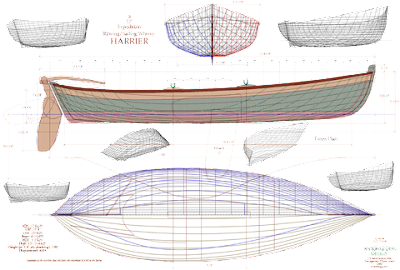 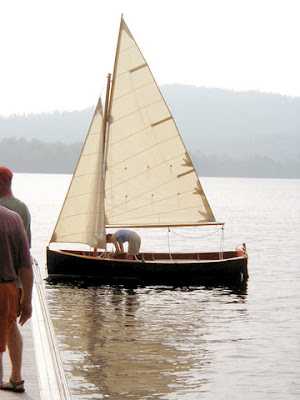 Jenny Bennett, a respected small boat journalist, worked with Antonio and builder Will Clements to produce her(modified for reality) dream boat, Small. Here she's getting ready for a sail, I believe her first in the boat.
Later in the day she was joined by designer and builder for the sea trials. 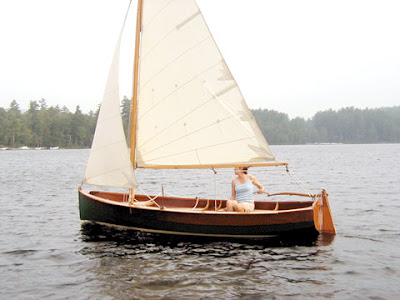 There's an article about Small, written by Jenny and featuring the clean, sharp photos of Benjamin Mendlowitz, in WoodenBoat number 181. Recommended 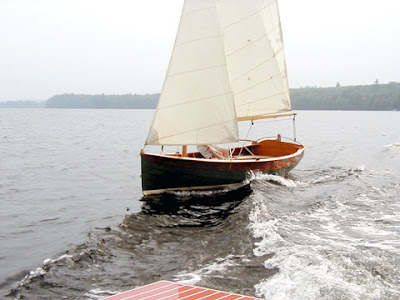 From Tony
"Small: Fast Harry calmed down and made civilized. Jenny really helped shape this design. I particularly like the low foredeck she specified. " 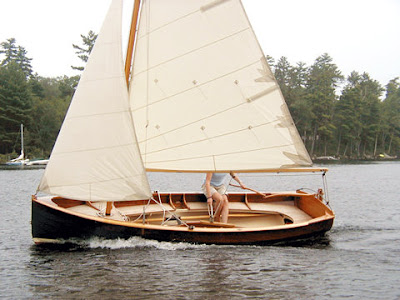 The workboat heritage of Small, an expression by Jenny's desire for a design reminiscent of her English upbringing, is evident here, especially in the plumb bow. Notice also the unvarnished teak deck and benches. 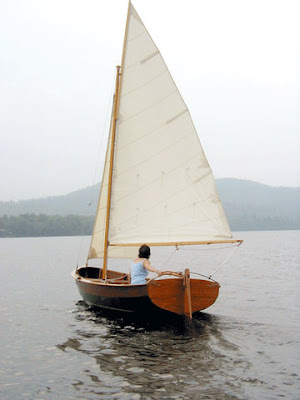 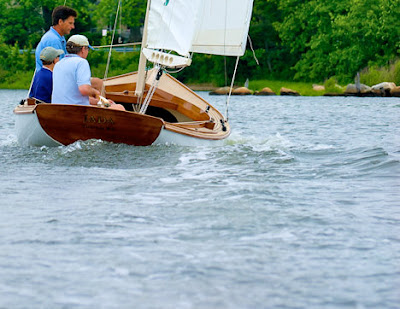 "Arey's Pond Daysailer:
The challenge for a fast boat that could be skippered by a couple in their eighties and float in 13" of water. The virtuous cycles that built up between the hull, skeg and winged rudder, combined with the carbon fiber rig surpassed my wildest hopes. Fast, easy, no pressure on the helm even at 7+ knots on a broad reach. I've been told her helm feels like the new America's Cup boats that way". Read Tony's design brief here. 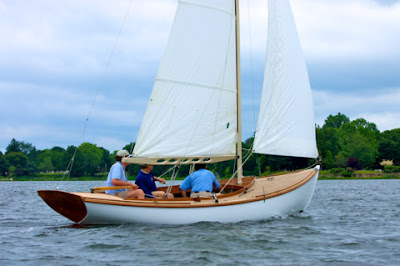 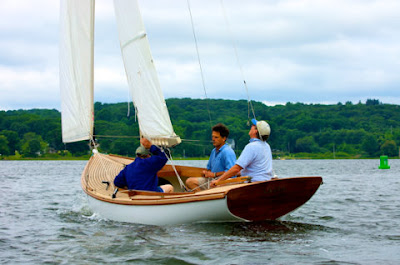 There's an excellent article on this boat in WB #186 written by Mr. Dias' long time friend and associate
Rueben Smith 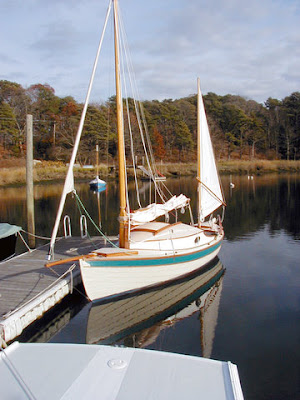 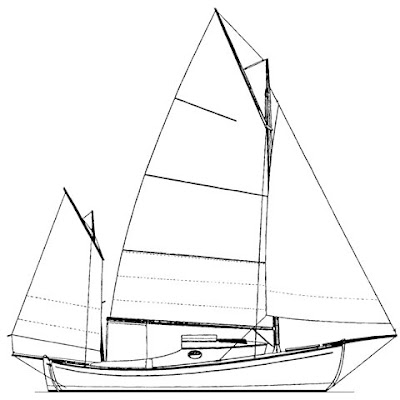 "A lot of cabin for the size, but a snug sailer, fast and with the yawl rig she maintains steerage even at a snails pace, so ghosting in close quarters is precise. A stretched out 20' or 22' would really be something." 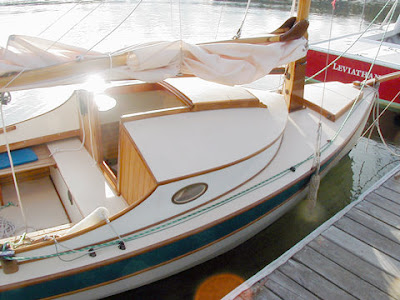 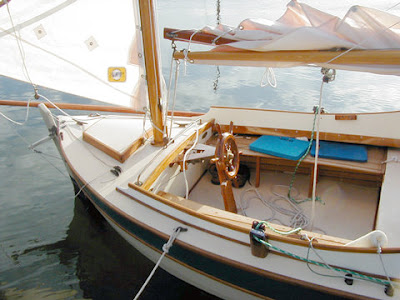 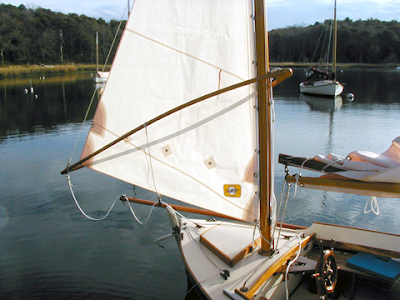 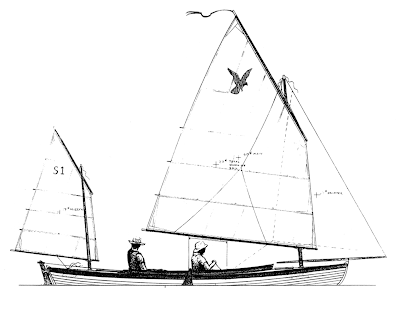 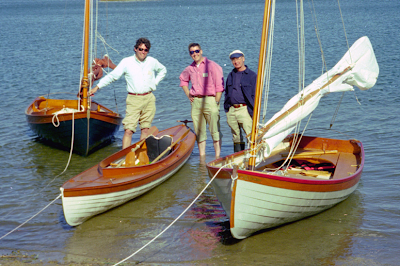 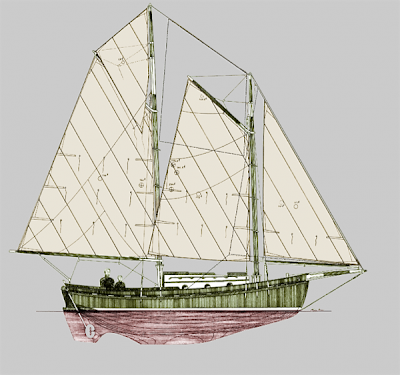 S & S Hammond:
Steve is a clammer and fisherman in Chatham, and old Yankee family, he's building the boat slowly, carefully. His ambition, and I hope to join him, is to sail out of Chatham harbor and go east, about a hundred miles. We'll drop some handlines over the side and see if there's a codfish willing to join us on her decks.
More and updates here. 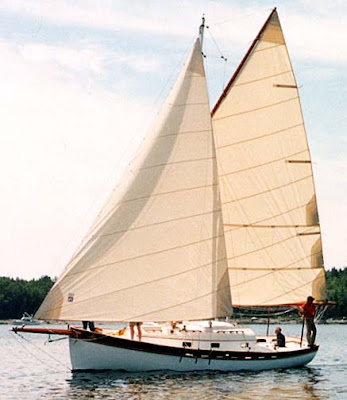 Truth:
"Crossed the Gulf of Maine to Provincetown from Brooklin in a Southeast blow. Never took a drop on deck. Rode across genuine 8' to 10' graybeards off the quarter as if on rails with two fingers on the tiller and over six knots under stays'l alone. Composting toilet, good cabin, standing headroom. At hull speed the wake is inches high." 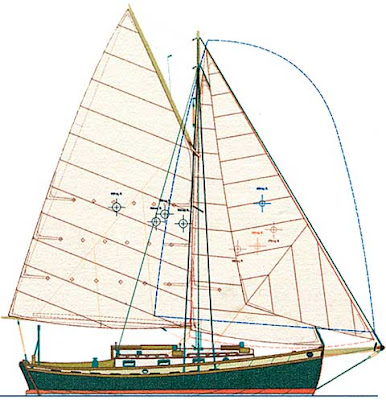 "Marty Harris is building this new 12’9″ Cape Cod Catboat design on Martha’s Vineyard. She’s going to sail in the Lagoon in Vineyard Haven next summer. Until we get shots of her underway, I’ll be adding construction photos as they come to me. You can also follow her construction on Marty’s site." 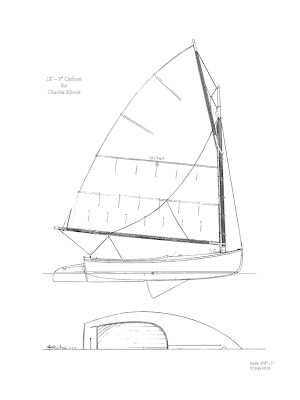 Some comments on this design from Jeff Halpern, a friend of
Tony and a racing companion:

As I see the design, its is a creative blending of some of elements of the early planning dinghy hull-forms (such as Uffa Fox‘s late 1930′s designs or Harry*) with the classic catboat typology. It is fun to read your drawings and see those places where the lines subtly stray form the mundane; to see the slight hollow in the waterlines at the bow and gentle flam of the topsides forward, and think of this passing through a wave, neither so fine that she porpoises, not so blunt that the bow collides forcefully with each wave, and with just enough flare to keep her dry. Similarly, I look at the stern and see the beauty of the tumble-home and raked transom, and your cleanly drawn run, so hard to achieve with this much beam, which should produce enough lift to surf and perhaps even plane in the right conditions. What a blast on a quiet Sunday afternoon, or a with a bone in her teeth, blasting back home with the wind from her quarter!…


All photos and other material courtesy Antonio Dias unless otherwise noted

Antonio Dias is if anything a thoughtful designer. Very thoughtful. This manifests in several ways, his attention to tradition, his attention to adapting tradition to serve his clients needs, and his attention to detail, expressed both in his boats and his finely crafted drawings. That said, he's also a designer who does not shy from using modern technology when it is appropriate. Witness Ran Tan's carbon fiber spars and the delta wing stabilizer (Tony says this is an aviation term, He thinks of it as more of a resolved endplate) on the Arey's Pond rudder, for instance. Tony is also interested in flight and worked for a time in the aviation design world.

In working on this article, I've had a deeper exchange with Tony than is usual with the people I write about, again, a testament to his attention to detail. This exchange of ideas and opinions has led to insights for both of us. Apparently a comment I made was a tipping point which led to Tony's understanding of boats not only as tangible objects but also as vessels of inner transformation, great archetypes of the human psyche. The exchange has benefited my perception of boat as well, deepened it and enlightened it. This has resulted in Antonio initiating a conversation about boats and their relevance to our lives in the form of a blog intended to be a sort of open forum about the meaning of boats called Boats for Difficult Times. I have posted some comments there and intend to write some more lengthy pieces for the blog, it is an interesting line of investigation.

Tony is a sort of renaissance man, a poet, painter and writer with talents, accomplishments and aspirations ranging beyond boat design. One can ferret these out by reading his other blogs, Fine Lines and Horizons of Significance and through other links found at Antonio Dias Design.

Antonio Dias is also the author of Designer and Client, a book about the design process and the interaction between the two parties. It's a candid look into what is usually an undisclosed process (often for good reason). I've only read bits of the book, but what I have read is compelling enough to suggest a more thorough read. I was particularly struck by one paragraph in the introduction which is relevant to Tony's current thoughts being aired on Boats for Difficult Times and which has bearing on our recent exchanges:

"It May seem ludicrous to expect boats-and pleasure boats at that-to be vehicles for a search for truth. Aren't they toys, conspicuous consumption,status symbols? How could they be anything else? Twenty -odd years down this path, I must say that I still have reason to doubt this conventional wisdom. I continue to see glimmers of the transformative power inherent in boats and refuse to abandon my expectations."

Antonio Dias is that rare individual who truly examines life and the issues surrounding him, and who uses the lens of one discipline to examine another, and then turns it around. This, to my mind is a philosopher. Not to be to heavy handed, let's call him a 'philosopher of boat'.

In writing about Tony Dias, I have perhaps focused more on the man than the boats, but there is ample information on his highly regarded boat design work. You can access his website to review a portfolio of his boats, dig into 'Designer and Client' for eight of his projects, and find great articles on three of his brainchildren in WoodenBoat publications,
Small is featured in WB # 181
the Arey's Pond Daysailer in WB # 186
and Harrier in the 2009 edition of Small Boats.
All of these can be requisitioned from WoodenBoat in their original form or downloaded in a digital format.

Posted by Thomas Armstrong at 1:09 AM

Thomas, thanks for the interesting article about Mr. Dias. I first became aware of his work in reading "100 Boat Designs Reviewed", published by Woodenboat. The book presents a review of a design called "Annabelle Two", which caught my eye because of its size (roughly 22-feet LOA) and because it possessed an auxiliary electric motor. As you've indicated in the article is sometimes Tony's way, it appears to have a classical rig and above-the-waterline style, but a modern dinghy-like underbody and weighted centerboard. Other than that article, I have never seen or heard anything more about this intriguing little boat, and Mr. Dias does not currently list it among his designs on his website. I wonder if any Annabelle Two's were ever built.

It's been really great going through your blog post, very well informed and described. Great to read and know more about such kind of stuff.