Bell Seagull: with a little help from my friends 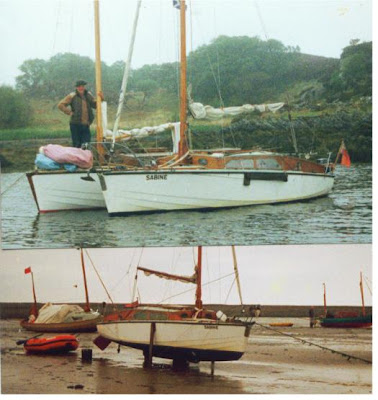 Two rare birds 'Sabine' and 'Steffi' (alas no longer with us)
rafted up, Scottish West Coast May 1991,
and
Sabine dried out Piel Is Aug 1992 An attempt to show hull profile
courtesy Edwin Dewhirste 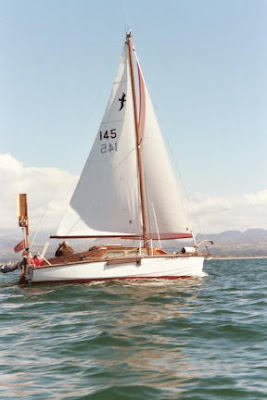 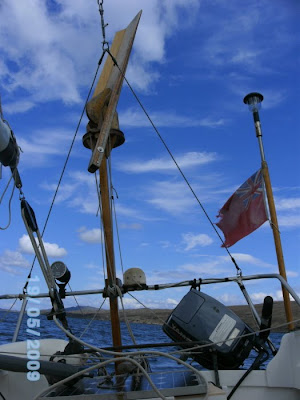 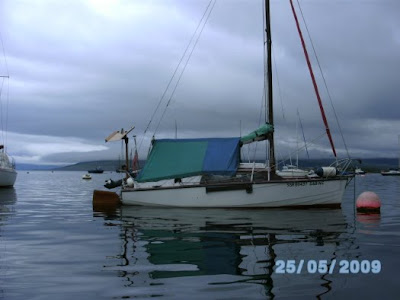 Sabine back in Tobermory Harbour
May cruise 2009
courtesy Edwin Dewhirst 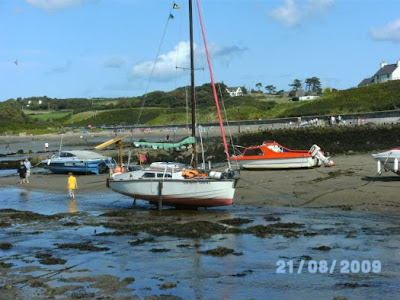 Sabine moored in the river bed in Cemaes harbour . Anglessey Very sheltered in the harbour but plenty of wind outside
August 2009 cruise
courtesy Edwin Dewhirst 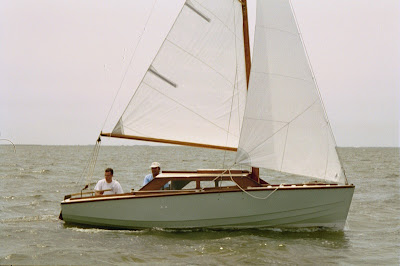 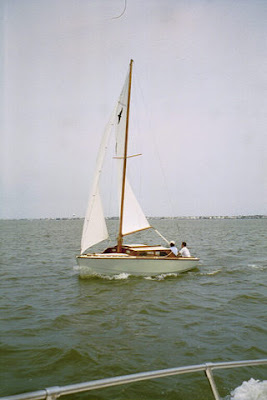 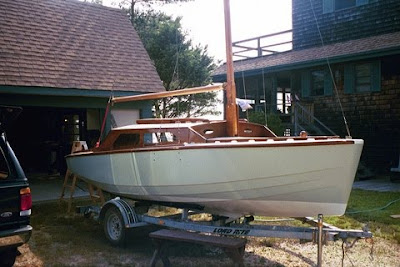 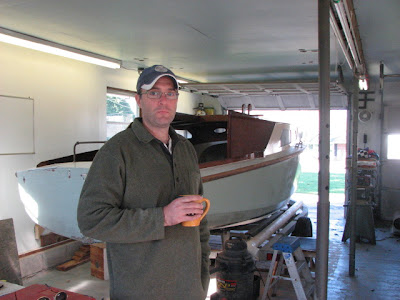 Chris Fretz and his Seagull at home
photo Thomas Armstrong 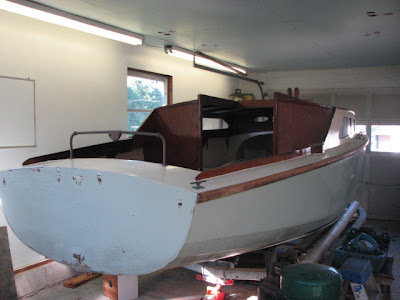 This will be a post about one small boat but will shoot off in several directions, so please pay attention. The design in question is the Bell Woodworking kit boat, the Seagull. A product of the boom in postwar Britain of small, trailerable family cruisers, most originally built in the amazing 'new' material, plywood. I found this design while researching the postwar phenomenon of dinghies and family cruisers which revolutionized yachting and brought it within reach of 'everyman'. Bell Woodworking of Leicester, UK, was a producer of many kit boats, beginning in the early 1950's. Ian Proctor, of Wayfarer fame, designed at least three of their offerings, and he was in good company. Bell also commissioned legends Jack Holt, Percy Blanford and Uffa Fox to draw boats for them. One of Mr. Proctor' designs has quite caught my attention. I love a well drawn reverse sheer, and this, along with a well proportioned cabintop and nicely done hard chines, drew me to the Seagull. Bermuda rigged, small for a cruiser at 18'6" LOA, she has spacious accommodations for her size, and has a retractable fin bulb keel which enables her for both shoal and deep water sailing. The Seagull was a popular design in her day, with over 300 kits being sold, and early on an active and enthusiastic owners group. As times progressed and fiberglass or GRP boats began to replace the owner built ply boats, the Seagull waned in popularity. Today there are only about twenty or so owners clustered around Edwin Dewhirst's forum for both the Seagull and her larger sister the Seamew. Edwin also maintains a website on these boats where he recounts his cruises in his beloved Seagull Sabine as well as providing essential information on both the Seagull and Seamew.
Through Edwin's forum I was able to locate and contact an owner of a Seagull, fortunately about 20 minutes drive from my home in Phoenixville , PA. I made contact with Chris Fretz and found him affable and forthcoming, with a beautiful story about his 'Gull. Chris is a passionate sailor and campaigns his e Scow on the New Jersey coast. Genetic. Chris' grandfather, Harold Pelham, built several of the Bell kits. A pram, the GP 14 (Jack Holt) and finally the Seagull. When his grandfather passed, Chris discovered the Gull, the basic structure was complete but lacked fittings and finish. Chris fell to and completed his new/old Seagull. He'd had the boat in the water for about four seasons, sailing from his base which was his Grand's shore house in NJ, when a road accident while trailing the boat back to PA for the winter sidelined the Seagull. She needs some work and I have offered help, to get the boat back in the water next summer. Knowing that there are no extant plans available for this boat, I approached Chris with an idea. If we could take lines off we could build a table of offsets and rescue the design from obscurity. Chris is enthusiastic, and when I explained that John Brady at the Independence Seaport Museum has a laser and a jig for taking the measurements, Chris offered to trailer his Seagull down to Philly, and suggested that John might want to build a class around the taking off of lines. Great! The next step was to approach John with the idea, and I found him enthusiastic also, with the caveat that we would need to have an appropriate number for a class, at least five bodies, and he'd like to open such a class up to help survey some of the boats in the Museums study collection. Wow, this is great, I thought. So here's a call to all my readers within striking distance of Philadelphia. If you'd like to learn how to survey an old boat and take her measurements, please raise your hand by emailing me or John.

There's a glitch, though. I would like to be able to offer plans to members of Edwin's group, and others interested in the Seagull. I have even contacted Paul Fischer of Selway Fisher, a British designer known for rescuing traditional boat designs and reworking them for modern homebuilding techniques. He expresses interest also, but only if copyright issues could be met and dealt with. And there's the rub. According to Edwin, although the boat was designed by Ian Procter, he was working on commission for Bell Woodworking, so the plans belonged to Bell. Folks who bought the kits received a set of construction drawings, but not a full set of plans. Bell Woodworking closed it's doors some years ago, leaving little to trace the copyright holders down, at least through the internet. My endeavors have been futile, including requests to the University of Leicester Library (Bell was located in Leicester). So I'm putting out a second call to my readers. Especially those in central England. If you know of the Bell heirs, or those holding their copyright, or if you are the holder, please help me out here. We could all benefit.

You might try this company - www.trident-uk.com. My memory may not be my strongest point, but I believe they have rights to make new plastic Mirrors, which they may have bought from a company called something like Tyrone, which I think bought them from Bell. What I'm thinking is that in acquiring the Mirror plans Tyrone may have also bought rights to the other Proctor designs that Bell had...

Btw, don't forget that Proctor designed some other relevant boats, including a successful National 18 (my dad used to sail them) and the 18ft Prelude, which is said to have a similar hull. For more on the Prellie, check http://www.prelude-owners.info/index.html .

Yet another interesting post. I'd be interested in learning form John to take off lines form old boats. I have such a boat in mind.

Hello Thomas. I love the style of your blog. As a Gull owner myself I would like to send you an update on how things are over here in Blighty.
Edwin and myself took two Gulls, his Sabines Gull and my own Robert Allan (named after my grandfether), to the West of Scotlsnd in summer 2012. we cruised from Craobh Haven around Mull and up as far as Eigg, and then south to Iona and round the bottom of Jura. at Jura we never quite made it to the Distillery but we did have an enjoyable evening in the hostelry accross the road.
Edwin has, unfortunatley due to mobility problems, had to put SG up for sale and has bought a small motor cruiser so that he can stay on the water. More details, pictures and videos on Edwin's site, u-tube and flick'r.
Johnny Seagull. (john kelly)