John recently sent a photo of his first boat. This is what he had to say: 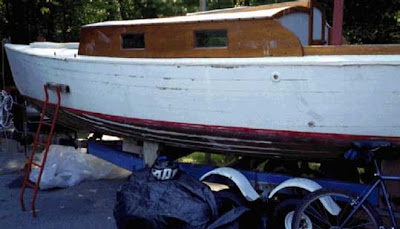 John's first boat was an A R True Rocket which his dad bought when John was 12. The carvel hull had been sheathed in glass and father and son saw to the maintenance of the boat.
the example pictured is for sale here. 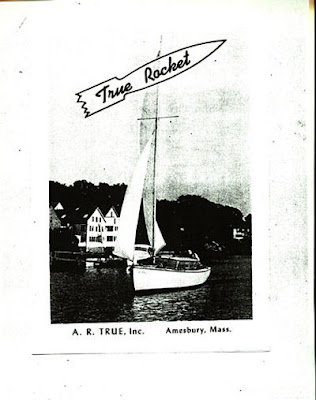 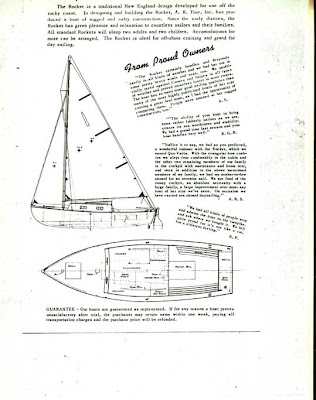 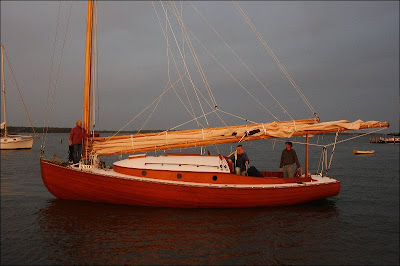 John's most recent creation, Silent Maid, motoring into the dock for the Mid Atlantic Small Craft Festival,
basking in the late afternoon glow. 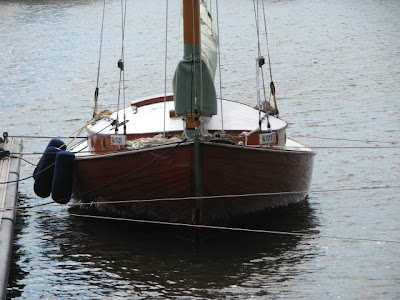 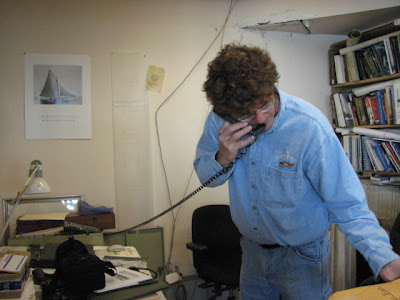 It's not all sailing and wielding a hand plane. 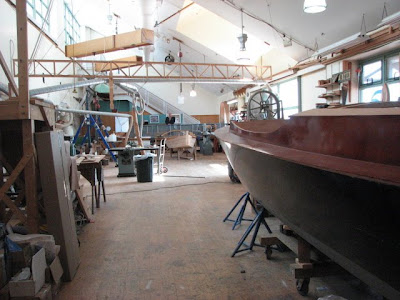 Workshop on the Water at the ISM is volunteer driven but must make it's way as a viable commercial concern. 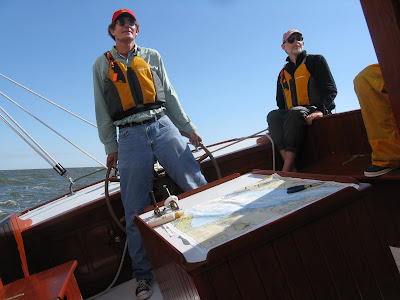 John at the helm during some exciting sailing on the way to St. Michaels 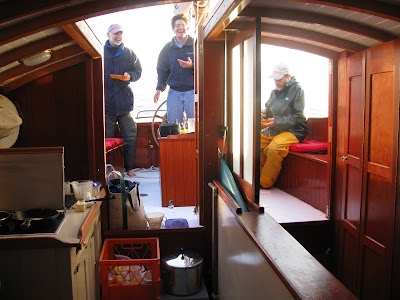 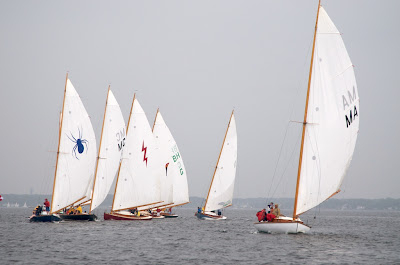 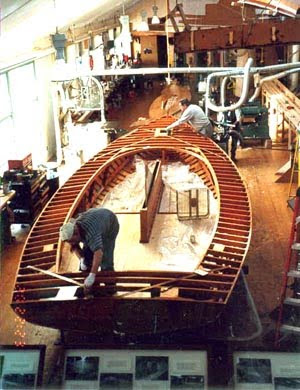 
Torch under construction at the WOW 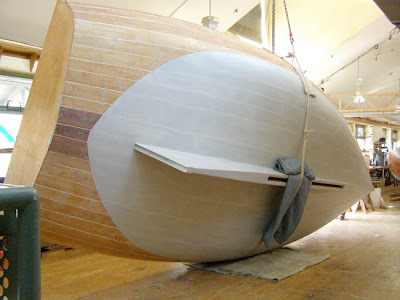 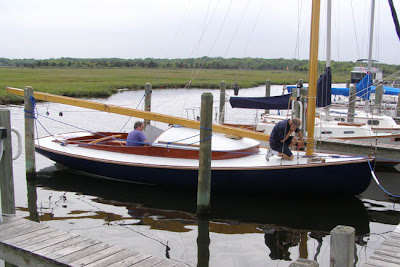 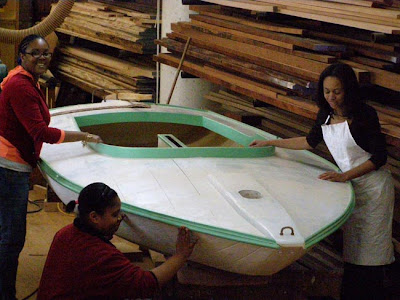 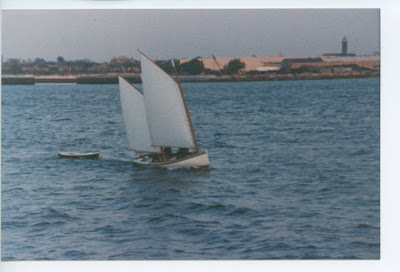 A traditional Delaware River Shad boat, synthesized from drawings and photos of older examples by John and built by the workshop. The original gillnet fishing boats would have likely had a sprit rig. 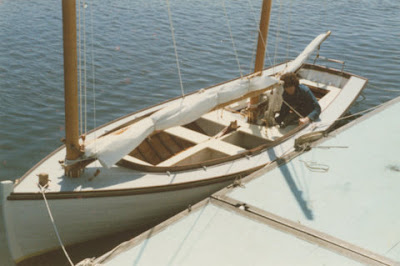 There is another version of this hull type exhibited at the Independence seaport Museum as a please touch display which details the building process. 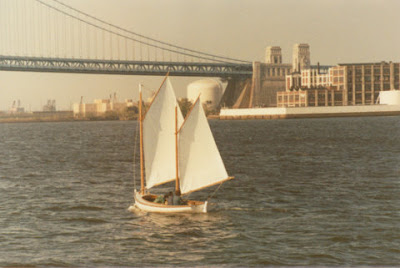 Though not traditional to this boat type, the gaff rig looks great and performs well. 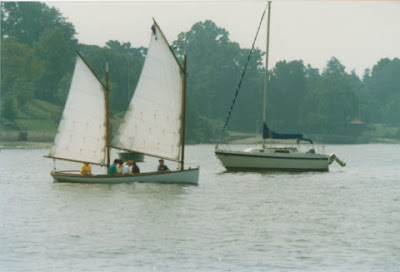 all photos of the shad boat courtesy John Brady

John Brady is a consummate boatbuilder. Largely self taught, he served 'apprenticeships' at the South Street Seaport in NY and at the Workshop on the Water in Philadelphia, back when it was still really on the water, a barge/workshop on the Delaware River. Preceding these experiences he was building boats ' out of the back of a pickup' during his formative years. His greatest influence at this time was the "Mariner's Catalog" (along with help from 'great people') and it was a read it try it kind of education. Today he is the head boatbuilder for the Independence Seaport Museum, directing, managing, teaching and building boats at the workshop. John's romance with wooden boats began at age twelve when his father purchased a used A R True Rocket, a 23' carvel planked cruising sailboat whose hull had been sheathed in glass. This craft offered John his first experiences of maintaining a boat and of sailing as he and his father worked and played together.
John has built 25 to 30 boats plus some reconstructions, and has designed maybe 1o. He is committed to traditional construction and design archetypes, but not in a hidebound way, for instance, witness the Delaware River shad boat above. The original fishing boats would have had sprit rigs, but John chose to rig this example gaff. The boat was built during a period which John feels was his greatest learning experience. For seven years, the workshop on the water really was on the water, housed on a barge in the Delaware. Roger Allen was the museum director and John the lead builder. Their practice was to research, build, sail and exhibit an example of a different local boat type each year.
John also seems to have a passion for catboats, particularly the racing catboats of Barnegat Bay. His latest creation, seen above and featured elsewhere in this blog, the exquisite replica Silent Maid, he has built five of the Barnegat A cats racing today. They are Tamwock, SpyII, Spyder, Vapor and Torch. These A cats date from the same era as Silent Maid, are slightly smaller than the B cats Maid represents, very fast and very expensive to build and maintain, yet there is a spirited group of sailors enthusiastically campaigning these boats today. They are the subject of a beautiful book written and illustrated by Gary Jobson and Roy Wilkins.
I asked John what his favorite project had been and his reply was telling, ' the one in process!'. There are also frustrations, the biggest being that building in this day and age seems to pit business against craftsmanship, though John admitted this has probably been true for most wooden boat builders in any era. He feels it's nearly impossible to manage a viable business today building truly small craft, and he should know, as the WOW, though a part of the ISM, must make it's way as an viable business and relies largely on commissions and it's mostly volunteer staff, with an occasional grant. John also feels frustrated by the lack of openness on the part of most contemporary sailors to traditional ways, meaning techniques, hardware, hull and rigs, and will be campaigning the Maid in classic boat regattas, promoting the world of traditional boats and championing openness to ideas, both traditional and contemporary. I have noticed that the Maid does have some modern hardware.

When he gets around to it, John would like to build himself a 26' centerboard sloop.

Near the end of our talk I admitted to John that I was rather keen on his shad boat design and wondered if another could be built, as a youth program involving youngsters in the building and sailing as an educational program. He said he'd been mulling over the same idea for years. Now, if we could just find a sponsor...

Posted by Thomas Armstrong at 10:24 PM

Nice profile of John. I've been following his career for a few decades now and have always been impressed with his boats and the use of volunteer workers to bring a little more grace to our waters each year.

I agree, the shad boat looks like lovely design.