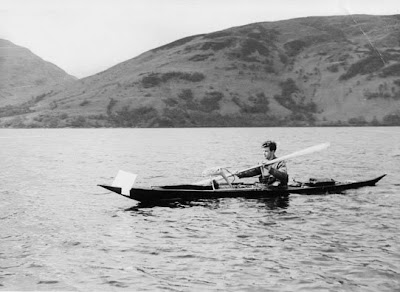 Ken and his new qajaq in Scotland courtesy Duncan Winning 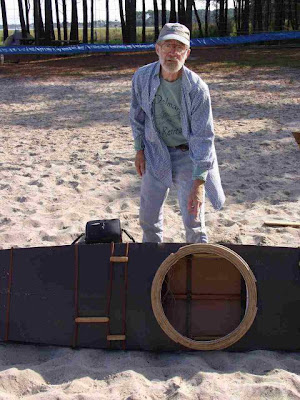 This is Ken with a replica of the original Igdlorssuit kayak at the Delmarva Paddlers Retreat
courtesy Edward J. Zachowski 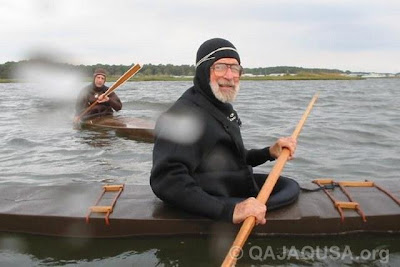 Ken in his replica paddling with Harvey Golden at the Demarva Retreat
courtesy Edward J. Zachowski 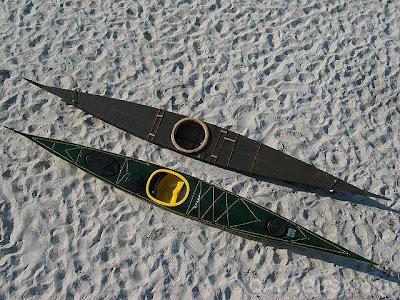 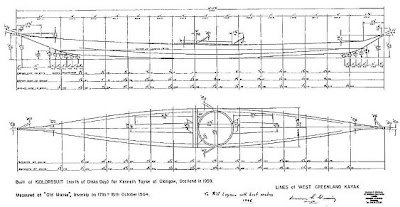 Duncan Winning and Joe Reid's drawing after surveying Ken's Kornilissen Kayak
courtesy Rene Van der Zwan
Bill Samson, on the QajaqUSA forum, alerted me to this story that Duncan Winning published in the December issue of Sea Kayaker Magazine. In 1959 a young Scot named Ken Taylor visited Igdlorssuit, on Uummannaq Island on Greenland's West Coast. He spent about three months there and was embraced by the locals due in part because of his rolling skills, learned in an unheated pool the previous winter. The hunters invited Ken along on their sealing forays. Emmanuelle Korniliussen, the last kayak builder in the village, built him a sealskin covered kayak, complete with hunting kit. Ken had another built for John Heath, which remained uncovered due to lack of sufficient sealskin for both boats. John's boat is now in the care of Greg Stamer. Ken's kayak and his increased kayaking skills created a stir within the Scottish Hosteller's Canoe Club on his return. Duncan Winning , a member of the club and a friend of Ken's, photographed the boat and built two kayaks based on the Igdlorssuit kayak. Later, in '64, Ken left for America and put the care of the boat into Duncan's hands. He made detailed drawings which gave rise to several boats, including a plywood, expanded version built by Geoffrey Blackford called the Anas Acuta. The rest as they say, is history. Eventually molds were made for fiberglass construction and Frank Goodman began production of the Anas at Valley Canoe Products. No single kayak was to have the impact that Ken's boat did on the evolution of the modern recreational kayak, at least in Britain. Emanuelle Korniliussen's boats have earned him a hallowed place in kayak history.
You'll find two podcast interviews with Duncan Winning on Simon Willis' website, and another featuring Bill Samson, discussing his several replicas. Duncan Winning was awarded the OBE for his contributions to the sport of kayaking.

Posted by Thomas Armstrong at 12:45 AM

I currently live on the island of Uummannaq and enjoy paddling these waters. I will be paddling to Illorsuit during the summer of 2010.

I appreciated reading your post and following all the links.